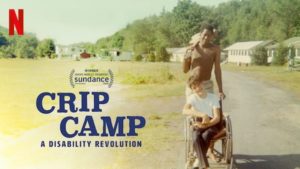 Want to know how old a street or building is? Look at how you cross the street. Look at how you enter the building. Look at the restrooms. Has that school, or place of business, or public institution been built or renovated since 1990? Has the intersection or sidewalk been replaced since then?

Why are these and other features in our built environment designed differently now?

Previous to 1990, handicap accessibility in buildings was completely voluntary. Buildings were usually built in a world tailored to the average-aged, average-sized, and average-performing human.

The documentary Crip Camp, now on Netflix, celebrates 30 years since the passage of the Americans with Disabilities Act of 1990 and tells the story of the people behind the movement. It seems odd that the seeds of accessibility were first sewn at a youth camp called Camp Jened, which was for disabled kids near Woodstock, New York. Appropriately, the camp was operated by progressive hippies. The magic behind this camp was that kids were treated as humans, equal to the camp counselors and everyone else who participated with or visited the camp. The campers had assistance according to their needs, but they were talked to like people, encouraged to have normal relationships, and participated in all kinds of typical camp activities. As these kids grew up, they faced a world where their wheelchairs would not go, where they needed assistance to navigate, or were required to “hold it” until they got home because there was more space in the restroom there. The empowerment granted to them at Camp Jened led many campers to become protesters and activists toward greater equality in the built environment. The film culminates in a dramatic scene in the final push to pass the ADA.

Today the Americans with Disabilities Act has effect on everything an architect considers when designing even the most mundane of things. As the Act has been amended and formal design guidelines are published regularly, there is still continual conversation around the subject of accessibility. Many argue that the ADA may be a foundation to work from but still falls short in supporting the manifold and nuanced needs of the whole public.

More recently there is a concept of “universal design” that attempts to take into account even those considered able-bodied but may face specific or temporary disability. For example, the very young, elderly, and temporarily or mildly disabled have benefited greatly from the ADA with open floor clearances, door pull-resistance standards, and mechanized assistance like ADA door openers. However, more is being done all the time to work more closely with how the human body develops, functions in maturity, and eventually degrades

Processing...
Thank you! Your subscription has been confirmed. You'll hear from us soon.